3 Comments
I am looking for a lot loan, C/O Refi., I am desperate!  Any lenders do them?

How Do I Get Commercial Deals?

1 Comments
I am just writing to see if anyone has any advice about how to get commercial deals.  I would really like to get into them, but how do I market myself as such?  Any advice would be wonderfully appreciated!  I am working on learning as much as I can about them; I want to market myself as an expert...

2 Comments
Is there any way to calculate APR on a standard calculator?  I am hearing that there is no way to do it unless you have a computer do it....help!!

1 Comments
This message is for everyone that would like to help support a cause that is affecting the entire world.  I am talking about AIDs.  I live and work in Portland Oregon.  The organization that helps people in this city is called Cascade AIDs Project, and every year, they have a walk.  I am sure tha...

4 Comments
Hey all! SO, I have been originating loans for a little over 6 months now, and I have been doing pretty well.  I have worked with a few realtors, and I have given them a few leads.  I gave one of the realtors I work with 2 leads that we are closing this month together.  The thing is, I have not r...

1 Comments
Hey!SO, I have my first commercial lead, and I need some advice.  What kinds of things will I need to know about from the borrower?  He has an 800 credit score, and does not have a property yet.  I have heard that he needs to find a property first, before he can be pre-approved.  Is that so?  The...

4 Comments
I had lunch today with a reporter from Just Out magazine.  He wanted to interview me about my young gay professionals networking group.  He had said that he wanted to meet up.  I had suggested a restaurant run by a guy that went to my group, its called West Cafe.  I had never been there, so I did...

4 Comments
Hey all!SO, last Wednesday I started my networking group, the Next Level.  It went really, really well.  I was dissapointed by the lack of people that came though.  We had 11 that showed up.  I had 30 people RSVP.  That made me kind of sad, because a small group just looks bad.  However! everyone...

Check out my new flyer

10 Comments
Hey all!  SO, last week I told you all about how I was going to have a booth at Earth Day.  Thank you for all of your input, it really did help!  I had some great conversations with people, and really got my name/card out there.  I had little trees in a box that I handed out, and also my new gree...

What kind of code do we use for Active rain, if i want to post a picture? Thx! 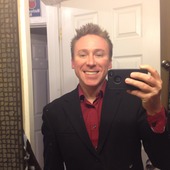